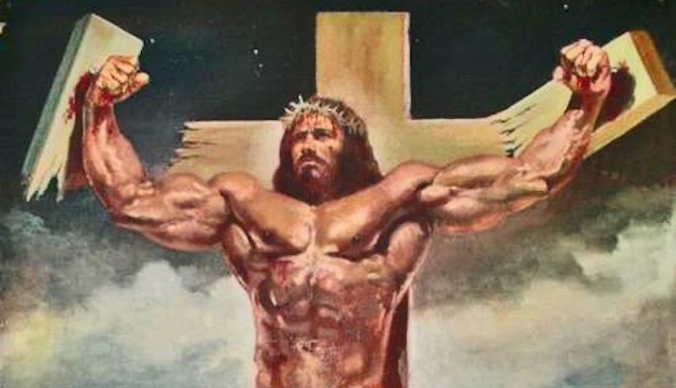 Churches often make Jesus seem like a wimp. They talk about Him in almost feminine ways. They emphasize His love and gentleness. And look at how He is portrayed in artwork! He’s either holding a lamb on His shoulders or children on His lap.

This wimpy view of Jesus has produced a wimpy Christianity. The church in America has completely lost its impact on our government and culture. Most Christians fail to break sin’s power over their lives and rarely share their faith.

But Jesus isn’t a wimp. And as His followers, we shouldn’t be wimps either. Here are six reasons why Jesus is the toughest person who ever lived:

He Condemned Hypocrisy
The Jewish leaders in Jesus’ day were hypocritical. Although they pretended to love God, they cared more about following their religion than obeying His Word.

He excoriates them in Matthew 23. He pronounces woe upon them seven times, and calls them “hypocrites” six times. He also calls them “sons of hell,” “blind guides,” and “snakes.” He asks them, “How will you escape being condemned to hell?”

He Confronted Injustice
The Jewish leaders neglected God’s commands to care for the poor. They used God’s Law to oppress the poor and take advantage of them.

On another Sabbath he healed a woman who had been bent over for eighteen years. The synagogue ruler said, “There are six days for work. So come and be healed on those days, not on the Sabbath.” Jesus called him a “hypocrite” and humiliated him (Luke 13:10-17).

He Controlled the Forces of Nature
We often fail to recognize Jesus’ raw, supernatural power. But He performed remarkable and fearful miracles that only God can do.

Once when He and His disciples were on the Sea of Galilee, a storm with the force of a hurricane came upon them. His disciples feared they would drown! But He rebuked the wind and the waves, and they obeyed Him.

Mark says His disciples were “terrified” (Mark 4:35-41). They were more scared of Him than they were of the storm!

He Cast out Demons
Jesus not only exercised control over the physical realm, but over the spiritual realm as well. He liberated many who were demon-possessed.

He was once confronted by a man who was possessed by a legion of demons. This man was scary! He was naked and violent; he lived in a cemetery, broke out of handcuffs and straightjackets, and cut himself.

But do you know what? This man was scared of Jesus! The demons inside him begged Jesus not to torture them! And when the townspeople saw His incredible power, they begged Him to leave (Mark 5:1-20).

He Commands Angels
Angels are powerful, heavenly beings. They are at Jesus’ disposal and under His command.

Peter tried to defend Jesus before His arrest. But Jesus rebuked him saying, “Do you think I cannot call on my Father, and he will at once put at my disposal more than twelve legions of angels?” (Matthew 26:53).

John had a vision of Jesus’ return. He was riding a white horse and “the armies of heaven were following him” (Revelation 19:14).

He Conquered Death
Death is our final enemy. No matter who we are or what we do, it ultimately defeats us all. Jesus conquered death temporarily during His ministry. He raised a little girl from the dead (Mark 5:38-43), a widow’s son (Luke 7:11-17), and Lazarus (John 11:38-44).

But He conquered death permanently through His crucifixion and resurrection. Peter says, “God raised Him from the dead, freeing Him from the agony of death, because it was impossible for death to keep its hold on Him” (Acts 2:24).

Hebrews 2:14-15 says, “He too shared in [our] humanity so that by his death he might destroy him who holds the power of death – that is, the devil – and free those who all their lives were held in slavery by their fear of death.”

If Jesus is so tough, why do we make Him seem so wimpy? Share your thoughts with a comment below!

3 thoughts on “Why Jesus Isn’t a Wimp”