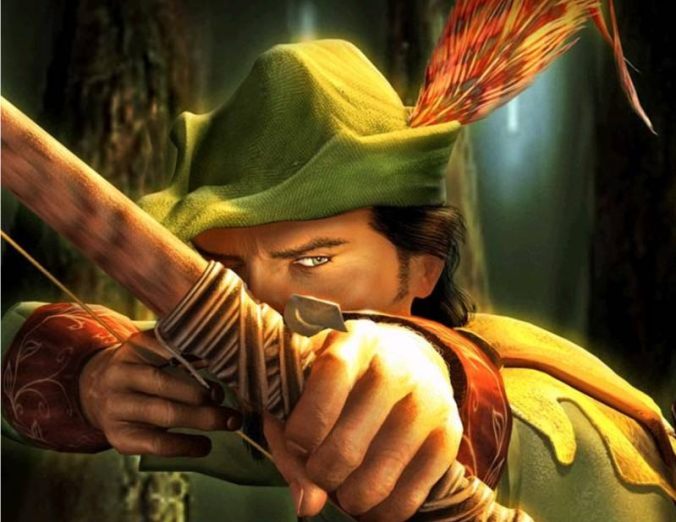 Robin Hood is perhaps the most popular character in English literature. He becomes an outlaw after shooting a king’s deer in Sherwood Forest. Unable to show himself openly, he dwells in the Forest where a band of “merry men” gather to him. They devote themselves to perpetual merriment and devise new ways to hoodwink the sheriff of nearby Nottingham.

But their primary mission is stealing from the rich to give to the poor. They often waylay unsuspecting clergy or government officials who travel (with swollen pockets) along Sherwood’s borders. His exploits make Robin a champion of the people but an enemy of the state. He was an established figure in English folklore by the 1400s.

Another medieval Englishman made it his mission to steal from the rich to give to the poor. But unlike Robin Hood, he redistributed heavenly riches. In medieval England, the spiritual wealth of God’s Word and the gospel were hoarded by the Catholic Church, locked away behind the Latin language and centuries of tradition.

An outlaw arose to “steal” these treasures from the spiritually rich and give them to the spiritually poor. He made the Bible available to the common people in their own language. His translation exploits made him a champion of the people but an enemy of the state.

His name is William Tyndale.

Stealing from the Rich

William Tyndale (1494-1536) was born in Gloucester. He attended Oxford from 1506-1516, graduating as a skilled linguist and ordained priest. He bemoaned the lack of biblical and theological content in his education, however. He then studied at Cambridge where he was introduced to Martin Luther’s writings.

He returned to Gloucester in 1521. He served as tutor, chaplain, and personal secretary to the family of Sir John Walsh. He often debated with Catholic clergy as they dined at the Walsh home. Their biblical ignorance and blind allegiance to the pope appalled him. On one occasion he boldly declared, “I defy the Pope and all his laws!”

He realized the only hope for his people was an English Bible. John Wycliffe had translated the Bible into English a century earlier. But he translated from the faulty Latin Bible used by the Church, and only a few hand-made copies were still in existence. So Tyndale sought authorization from the bishop of London for a new English version, translated from the Bible’s original languages.

His request was denied but he decided to undertake the work anyway. Because unauthorized translation was considered a crime against both Church and crown, he fled to the European mainland in 1524. He lived there as a fugitive until his death twelve years later.

Giving to the Poor

Constantly on the run, Tyndale took sanctuary in large cities in Germany and Belgium. These cities provided many places to continue his work in hiding. He published his first version of the New Testament in 1526. In 1530, he published Genesis – Deuteronomy. These translations were smuggled into England where they sold like wildfire.

He persisted despite serious opposition. English clergyman bought his translations only to burn them. The Church and King dispatched agents to find and arrest him. And the Church launched severe attacks on his character.  Even in the face of manhunts and slander, his translation work continued.

He published second and third editions of his New Testament in 1534. These too were smuggled and sold in England. During these years, he also wrote a few theological works as well as a response to his attackers. He finished translating Joshua – 2 Chronicles in 1535. Unfortunately, he would not live long enough to put them to press.

Tyndale was finally captured in the summer of 1535. He spent more than a year imprisoned in the castle of Vilvoorde (a few miles north of Brussels). He stood trial in August 1536, where he was stripped of his priesthood and condemned as a heretic. He was executed on October 6 by suffocation and burning at the stake.

Father of the English Bible

Before dying, Tyndale prayed, “Lord, open the King of England’s eyes.” Two years later, King Henry VIII decreed that an English Bible be placed in every church in England. These Bibles were based largely on Tyndale’s translations. The King James Version (published less than a century later) also relied heavily on his work.

Since 1611, the KJV has been the foundation for all subsequent English translations. Tyndale’s influence has thus persevered and strengthened to this day. He was the first to translate the Bible from Greek and Hebrew into English. And he did it so accurately that later versions can’t help but rely on his work!

We cannot determine how much we owe this man. When one considers the prevalence of English in the modern world and the proliferation of Bibles and biblical resources in English, it is impossible to calculate our indebtedness to him!

All we can do is admire his tenacity and “do our best to present ourselves to God as one approved, a worker who does not need to be ashamed and who correctly handles the word of truth” (2 Timothy 2:15), just like he did.